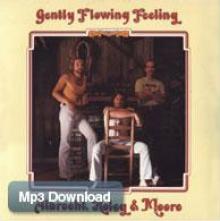 Al Perkins is a famed pedal steel player who had worked with Steven Stills. He was beginning to produce young artists and after hearing AR&M’s songs Shotgun and Detroit (brought to him by Terry Talbot) agreed to be a part of the bands next project.

He, along with the Talbot brothers, joined AR&M in Bismarck, North Dakota in the summer of 1976 to record the album Gently Flowing Feeling. The Tri-Mark Studios on the banks of the Missouri River was where the songs were cut. Tri-Mark had gained national notoriety for helping John Denver save an accidentally dropped track from one of his then recent recordings. The studio was AR&M’s first time in a state of the art facility.

A young first time producer from South Dakota named Greg Nelson arranged the music and produced the sessions. Greg included an instrumental piece, "Journey", which served as a prelude to Alan Moore’s song, "White Seagull". The strings were cut in Anderson, Indiana and several local musicians also played on the tracks.

The final mix was engineered and produced in Nashville, Tennessee by Randy Matthews. Randy added other musicians to several tracks including Bob Hartman, who would later join Scott Roley in the band City Limits. James Isaac Elliot, another future member of the Nashville based Scott Roley Band and long time friend, did the photography and cover art. Over the years James joined Scott on many song co-writes and helped him finish his IVP book on community development, "God’s Neighborhood".

Whitehorse Records along with the Windy Distribution Company released and sold ten thousand copies ofGently Flowing Feeling with the first thousand pressed in white vinyl. Several additional runs in black vinyl were made along with the customary cassette and eight-track tapes.