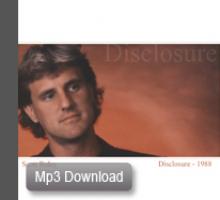 Scott Roley spent the last five of his twenty years in music touring with Michael Card. What started out to be a brief twelve-concert, ten city tour with Mike, turned into a life long friendship.

In the summer of 1988, as Scott was working through the decision to continue touring with Mike or to pursue pastoral ministry he recorded a production demo for Starsong Records. He had written fourteen sonds with Dr. Bill Lane as mentor, and another song, The Walk, with Michael Card. Each song was to be a disclosure of a biblical or spiritual truth. The working title of the project was Disclosure.

Fourteen of the songs were recorded in Nashville at Gary McSpadden's studio on Music Row. One song, The Reward, written after the Nashville sessions, was recorded on a four track cassette deck in the fall of 1989 over Thanksgi ving vacation. Scott played all the instruments on the project.

In the spring of 1989, when Scott decided to pursue pastoral ministry the Disclosure project was shelved, never making it into production. It would take another five years for Scott to complete the process of ordination in the Presbyterian Church in America (PCA). The only surviving copy of the Disclosure project was a single worn cassette which now has been digitally remastered.