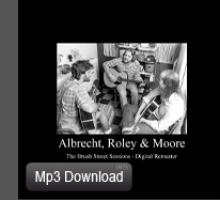 The Brush Street Sessions were recorded on a four track deck and mix in various rooms of the Roley residence on Brush Street in Madison Heights, Michigan. Although the recording was never released, it lead to the production of a "45rpm", containing Detroit (A side) and Shotgun (B side). The 45 received Albrecht, Roley and Moore's first airplay on local radio. Though both of these songs are included in The Brush Street Session as tracks 2 and 5, Bonus Tracks 11 and 12 were re-recorded in a 16 track studio in Kalamazoo, Michigan for the production of the 45.