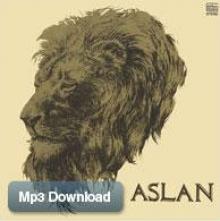 The band (Aslan) was formed at Spring Arbor University near Jackson, Michigan in 1972 as a music group traveling the mid-west promoting the college. The original members were a trio, Linda Kendall, Ted Kallman and Scott Roley.

The band’s popularity grew and so did its members. The additions of Martin Vipond, Greg Buick and Jeff Roley rounded out the group. Later Ed Englerth joined (Aslan) playing bass guitar. The band’s only recording, Aslan was produced and engineered by Ron Moore and released through Airborn Records. It was recorded on a four-track (TEAC 3340) tape machine in the basement of a church in suburban Atlanta, Ga. Airborn Records began as a home label under the direction of Ron Moore. Along with Ron, Airborn Records featured the early efforts and first recordings of Pat Terry, Mark Heard, Aslan and later Albrecht and Roley. Jeff Roley oversaw the unique cover art for the Aslan project.

In all there were two thousand copies of this recording pressed and released. One thousand were sold through the original pressing in the spring of 1973. Spirit Records cut another one thousand pieces in a re-release several years later.